- February 11, 2018
We visited the Alhambra on a slightly chilly but pleasant late January day. We decided to separate the Alhambra from the rest of our Granada post since it is a bit of a photogenic blog hog and really can't share with anything else.

We have been looking forward to the girls' reaction to it for our whole Spain trip, and the extra build up of seeing it lit up for two nights before we went added some drama and mystery to the whole affair. 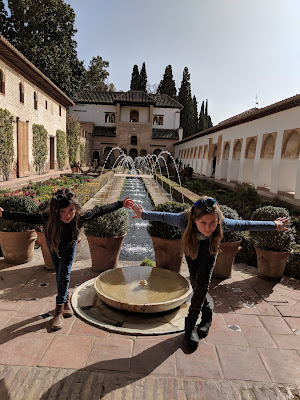 The girls were impressed.  It takes a lot for buildings to impress kids, since structures are way down on the list of things kids care about, but they were not in a rush to leave and were perfectly content to wander around seeing what amazing thing was around each corner. 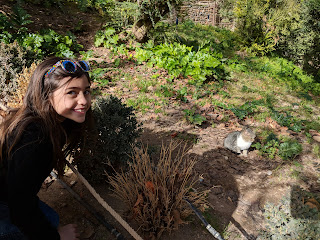 It helped that there were feral cats everywhere in the Alhambra.  It is unclear if they have tried in the past to control the population, but if so they clearly have thrown up their hands in defeat.  The visitors and especially the kids were thrilled with their presence though, especially the kittens. 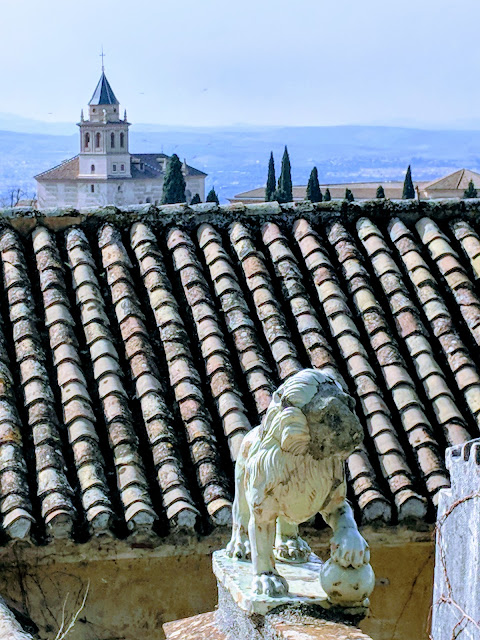 Visiting the Alhambra is something you need to prepare for in advance if you are going alone rather than with a paid tour group.  Tickets sell out far in advance.  We are talking months in advance for a visit in the low season, and even longer for tickets during the blistering and overcrowded summer.  I reserved our tickets this summer and we needed to pick a half hour window for our entry time into the Nasrid Palace.  I figured that with kids and needing to get there from our cave we should give ourselves some time in the morning so we chose the 10:00 time slot.

Well, while 10:00 seemed luxuriously late when we were state-side, with our newly adopted sleep schedule (to bed after 1:00 and waking up after 10:00) it was quite a struggle to get there on time.  We made it nevertheless and were among the first in our time group to enter (after the bomb-sniffing dog confirmed we had no intention of destroying the beautiful buildings). 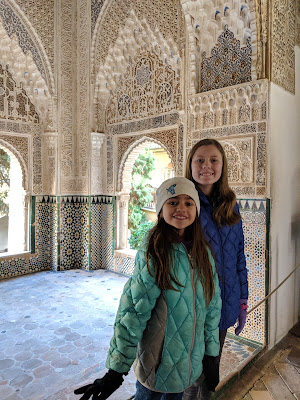 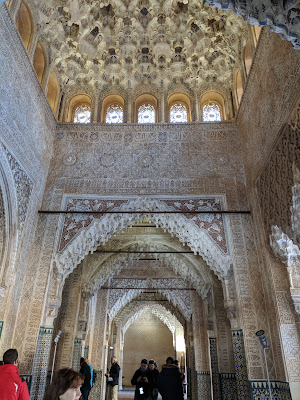 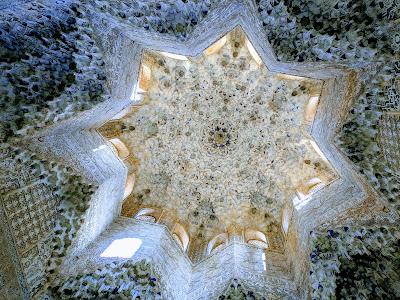 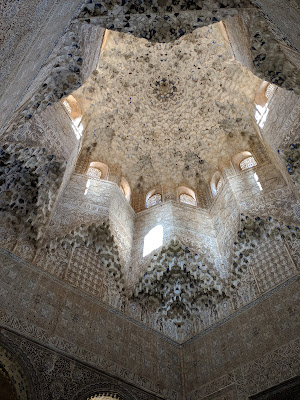 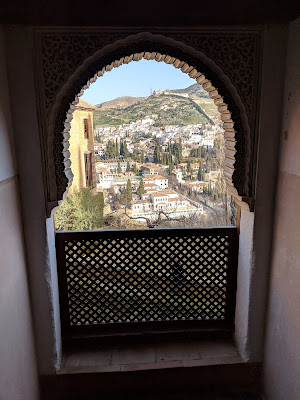 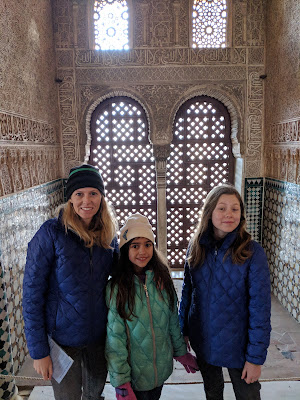 The detail of the plaster and tile and wood carving are hard to believe.  They are so intricate and busy even with nearly all of the color having faded centuries ago. But there are spots where the color has been either partially restored or preserved where you can get a sense for how overwhelming the detailing was in its prime. 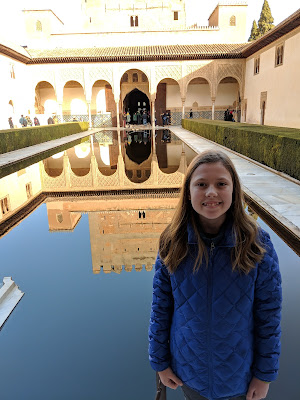 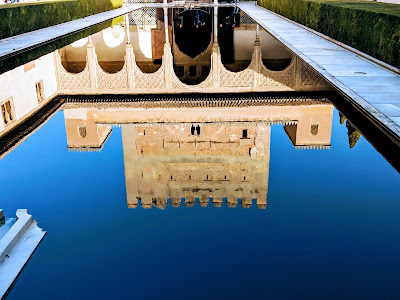 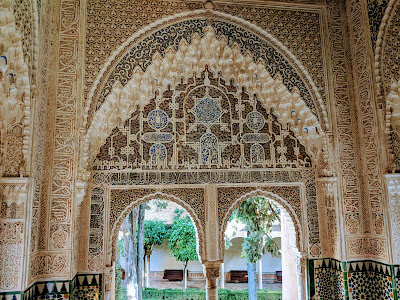 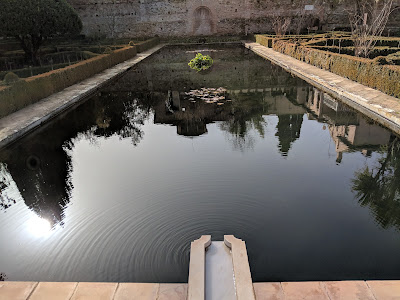 Because we visited in the winter the gardens of the Generalife were only a shadow of their robust selves, but still beautiful in their own right. 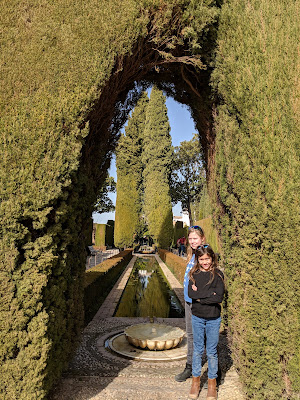 One of the girls' favorite parts of the Alhambra was the Alcazaba, the fortress,  one of the oldest sections of the complex with barracks, and prison cells, watch towers and strategically placed arrow slits, and amazing views of the rest of Granada (and our cave in Sacromonte). 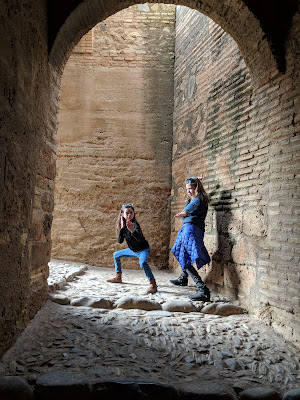 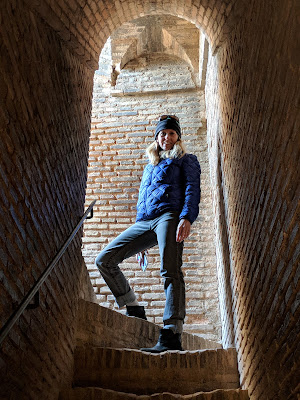 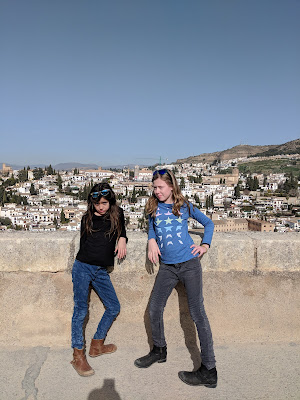 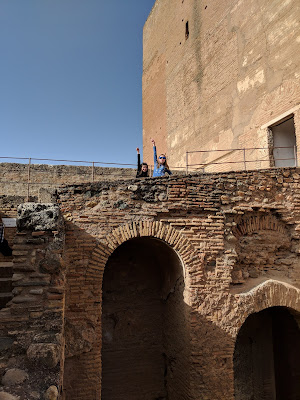 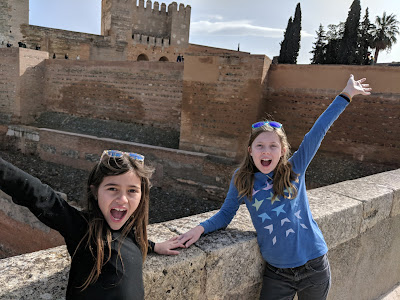 The scale of the Alhambra, with the fortress and the gardens of the Generalife deserve at least a half day of exploration, and we spent hours there.  I think having seen the Alcazar in Seville first took a small part of the splendor away since it was not the first time the girls saw the detailed plaster and tile work, but it was still an amazing experience.   The Mezquita in Cordoba and the Sagrada Familia in Barcelona are the buildings I'm most excited to show them now that we have seen the Alcazar and the Alhambra.

Next blog post is about our vertigo-inducing walk on to the Caminito del Rey on the way to Ronda.