- February 09, 2018
Last week we took a trip within a trip! We packed up a little rental car and left Seville for Granada and Ronda with a few outdoor activities on the way to and from.

Although there is a train from Seville to Granada, with all four of us it was cheaper to drive, and gave us the option of choosing a beautiful route.

We are loving Seville, but driving out of the city and into the open countryside reminded us that, at heart, we really aren't city folk. 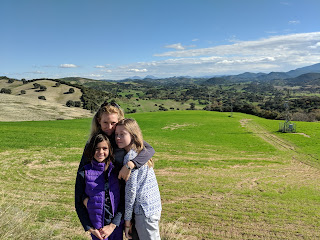 The views from the car were spectacular, and impossible to properly capture in pictures.  But I did like this old farm house in the rain. 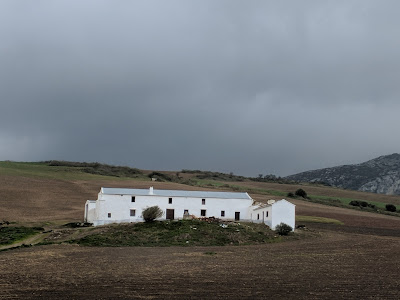 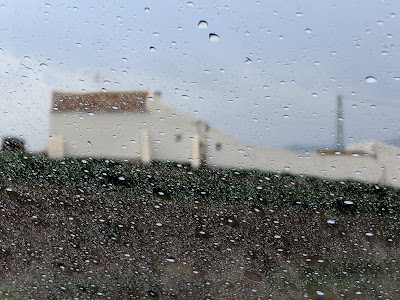 Via Verde
Our first stop was a bike path in the Sierra Nevada Mountains. Part of the network of "Via Verde" (green path) bike paths created on unused railway lines (similar to "rails to trails" back home).  We intended to rent individual bikes, but none the the bikes were the right for Naomi so we rented this: 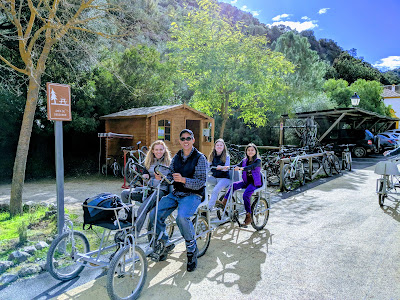 It was silly and fun and so much harder than pedaling a regular bike!  We could all chat easily and the kids didn't have to worry at all about wrecking.  The path travels through many tunnels and passes one of the largest nesting areas of the griffon vultures in Europe. They were circling overhead in a huge flock. 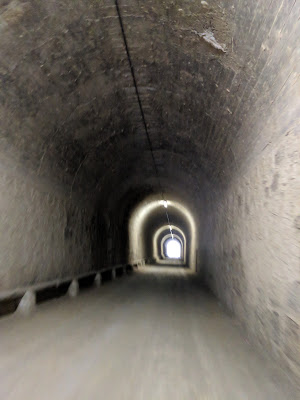 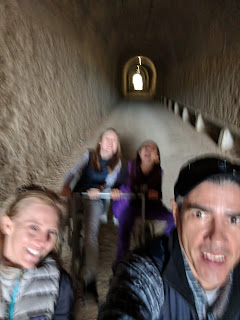 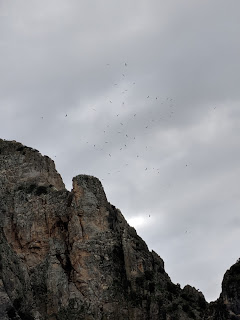 Being back in the mountains felt like a little taste of home for sure.

Granada and the Sacromonte

From there it was off to Granada! We rented a cave house in the Sacromonte neighborhood and the girls were so excited to see it.  (If you are interested you can read more about the Sacromonte here). It didn't disappoint. 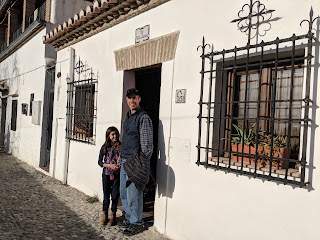 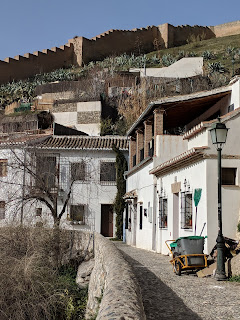 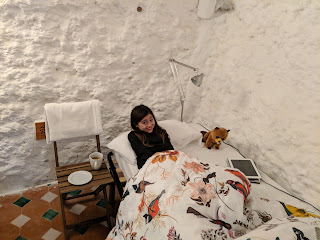 The front part of the house is built normally but the majority (the den, bedrooms, bathroom) are carved directly into the mountain.

We have a video (it will be part of the video the girls make in Spanish) of the apartment, but the photos of the rental on Airbnb itself are good if you want to get a feel.

The best part of the apartment was its view of the Alhambra.  It was directly across a small valley from the apartment and people would walk up the hill to the Sacromonte to see the view. The same one we got every time we looked out our little windows.

The Sacromonte is a traditionally gypsy neighborhood on a hill above the central portion of Granada. It has a very different vibe (more bohemian and constricted with narrow cobblestone streets and literally hundred of semi-wild cats) than the center of Granada with its grand boulevards and shopping districts. 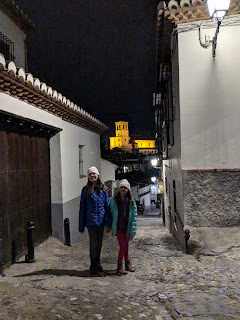 Granada Cathedral
Our first official activity (other than wandering around the Sacromonte and  Albayzín neighborhoods) was the visit the Granada Cathedral (the Alhambra was the following day).  Although smaller than the Seville Cathedral, both girls preferred it.  They found it less severe and cold feeling. The light from the stained glass windows was impressive and made the building feel so much more alive than the dark, cold, gargantuan Seville cathedral. 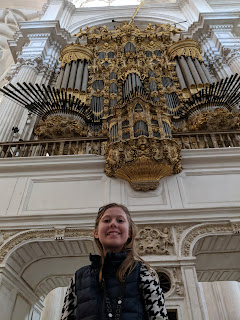 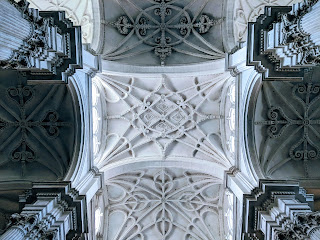 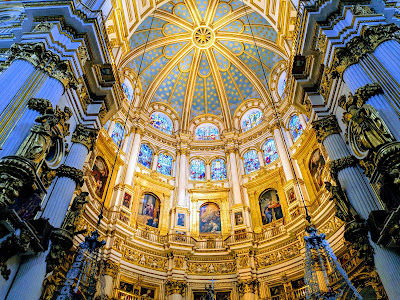 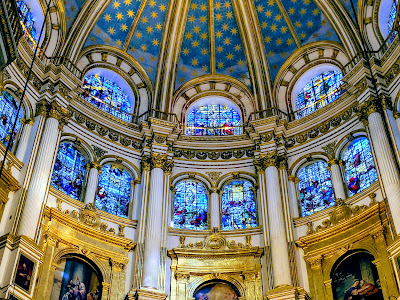 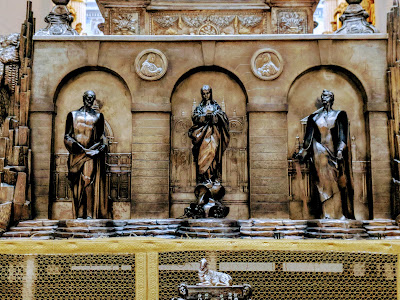 We stopped for a quick bite and had one of our favorite (up to that point) meals at a tiny (3 tables and room for 4 at the bar) Italian restaurant, !Viva Maria!  The owner/chef/waitress was great and the lasagna and chocolate cake made happy campers of us all. 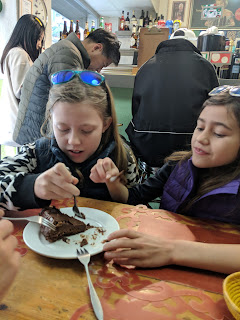 The next day we went to the Alhambra, but it deserves it own post, so I'll skip that day and jump to our next major activity --- the Granada Science Museum.

We all agree that the Granada Science Park (Parque de las Ciensias) was one of the best science museums we have ever visited, which came as a big surprise as we just decided to pop by on a chilly day not expecting a whole lot.  We spent most of the day there but still only ended up seeing about 1/2 of the exhibits.

First up was the BioSphere, an open plan "zoo" of sorts, where the visitors walk directly through the animals habitats. You aren't allowed to touch the animals, but they are right there with you.  There were lemurs, birds, lizards and even a sloth! 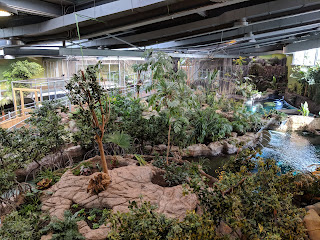 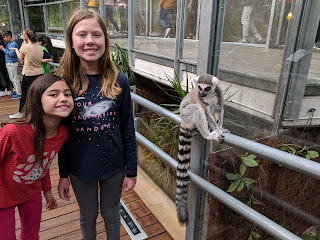 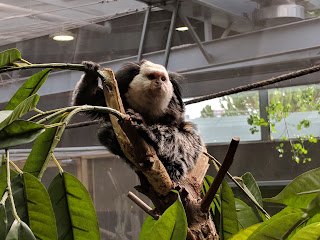 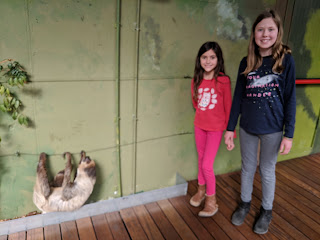 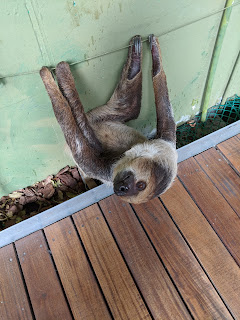 The science education center had a fascinating exhibit about the human body and was something that you would never see in the United States.  The exhibit actually acknowledged that human beings have genitals and didn't awkwardly cover them in images of how the body works.  There was also a very thorough human reproduction section complete with a fake ultrasound machine you could use on a pregnant dummy and an extensive display about contraception.  The whole thing was so tasteful and straightforward that it really drives home how backwards we are about human sexuality back in America.


Flamenco
One of our nights in Granada we took the girls to an incredible flamenco show at Templo del Flamenco in another cave not too far from our own.  It was (of course) the girls first experience and amazingly we had front row view.  The acoustics of the cave added to the passionate singing, guitar, clapping and dancing and it definitely made an impression. 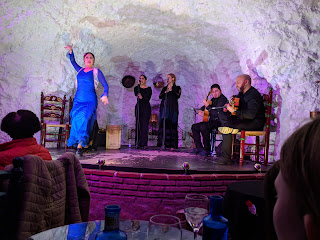 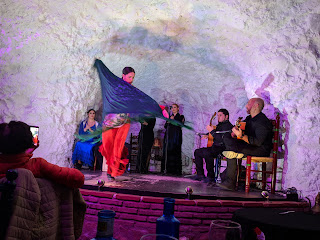 The next blog post will cover our visit to the Alhambra, then it was off to the Caminito del Rey and Ronda!