Our second mini-trip from Sevilla was to Cordoba, famous for its flower-filled patios and the Mosque (turned) Cathedral - the Mezquita. 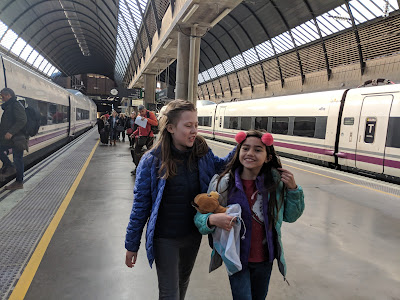 We took the high speed AVE train that got us to Cordoba in about 40 minutes. It reached about 300 km/hr at its fastest and it was beautiful seeing the orange groves zipping past.

It was our first train trip in Spain. My previous trips to Europe were done almost completely by train, but with a family of four, and being over-25 year old drivers, it is usually more efficient to rent a car than to buy four train tickets. Cordoba was an exception. 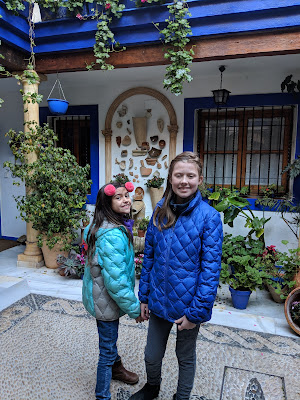 Our visit to Cordoba was short, two nights, so we only had time for a quick walk and dinner the evening we arrived, one full day of exploring, then we left around noon the following day.


Since it is February, flowering patios are not at their height of splendor, but they are still present and its easy to imagine what an explosion of color they are in a couple of months from now. 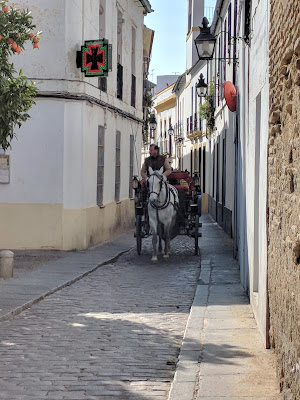 The main purpose of our visit was to see the Mezquita. I have strong memories visiting there when I studied in Salamanca, and I was interested to see if my memory of its beauty was correct, and to see what Nick and the girls thought of it. 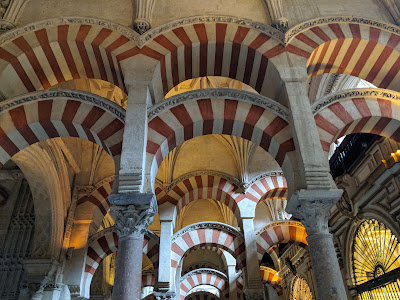 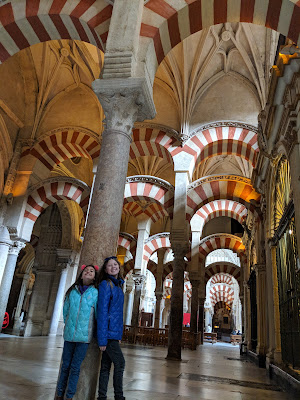 Well, everyone was rightfully amazed. It is definitely a striking beauty of a structure, with its candycane striped arches and wide open spaces. It is also odd with a shockingly different christian cathedral plopped down right in the center, impressive in its own right, but like a white horse standing in a field surrounded by peacocks.

Each is beautiful, but their juxtaposition is oddly disorienting. Charles V, upon whose permission the cathedral was built, when seeing the cathedral completed apparently remarked, "You have destroyed something unique to build something commonplace." (per Wikipedia).  I'm with him on that point.

The arches were just as beautiful as I remembered. The seem to go on and on in every direction and the open emptiness beneath them is its own experience, pulling you toward and through the space. 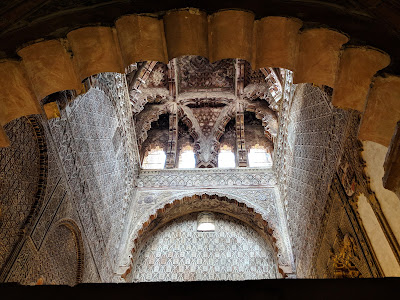 When thinking back to my previous visit here (over 20 years ago) I only recalled the arches. I did not even remember that there was a cathedral sitting in the middle at all. To get a sense of how odd the placement of the Cathedral is, see more at the Wikipedia page about the Mezquita. 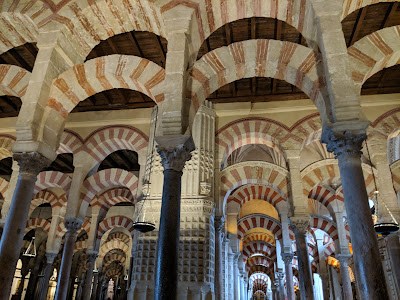 It was awesome that the Christians kings at the time took enough of a liking to the mosque's asthetic and didn't destroy it entirely to build the cathedral, but the cathedral is certainly the least remarkable, or indeed, even memorable, aspect of the building. 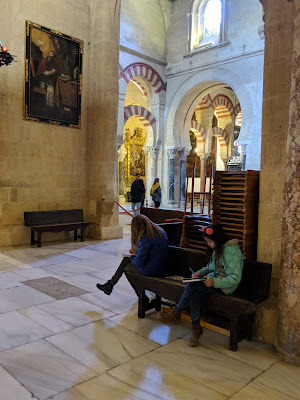 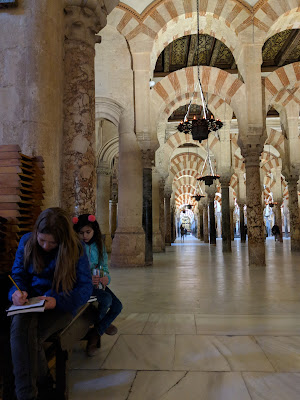 The girls brought their drawing notebooks so they could sketch some of the interior of the building. I did the same thing during my visit as a college student and it forces you to look so much more closely at the detail of the arches and how they were constructed when you are trying to figure out how to properly draw them.

All in all it was an amazing experience and just as stunning as I remember it to be.  Really happy we came to Cordoba, even if the Mezquita was the only thing to see there, it would be worth visiting.

But, there is more to Cordoba than the Mesquita! For example, the Alcazar and its beautiful gardens (which in my mind had melded with the gardens of the Generalife at the Alhambra from my previous visit, so visiting cleared up a lot of confusion for me).  Since it was a short trip we broke one of our unspoken rules and did more than one big "touristy" event in one day, but the girls handled our long day just fine. 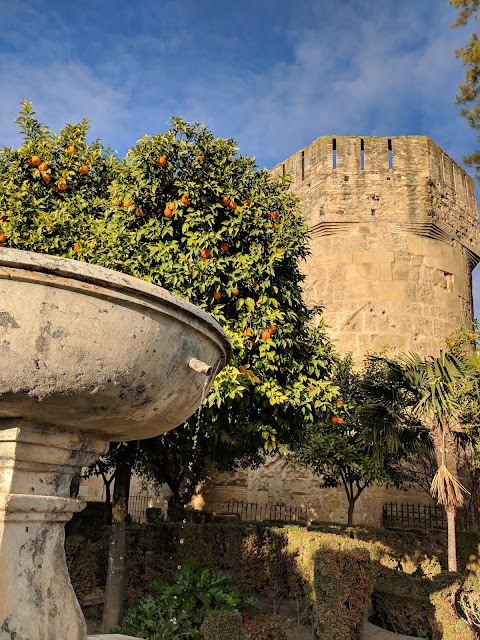 The Alcazar is well preserved fortress and served as a residence of Isabella and Ferdinand. It, as so many buildings in the South of Spain, has changed hands between the Visigoths, Moors, the Spanish, was a chief location for the Spanish inquisition, was where Isabella and Ferdinand met with Christopher Columbus before he headed off on his voyage in 1492, and even served briefly as a garrison for Napoleon and as a prison. 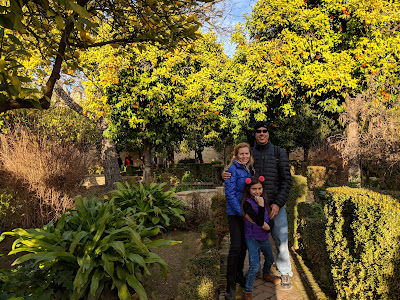 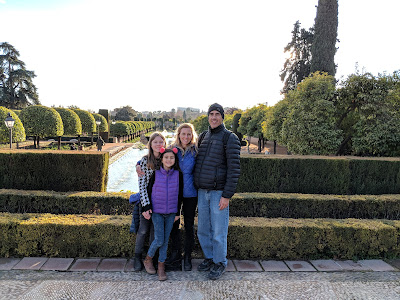 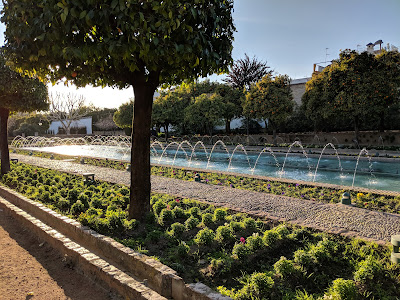 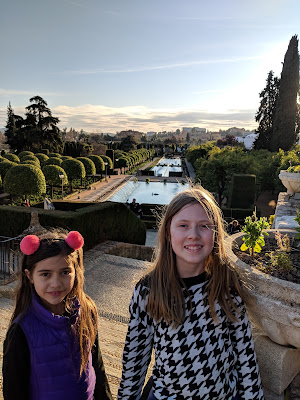 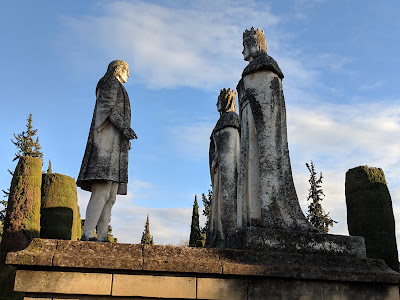 Isabella and Ferdinand meeting with Columbus.  They love the guy here ("Thanks for making us (temporarily) filthy rich with all the silver"!) and there are more statutes of Columbus in Spain than I have seen anywhere in my life. 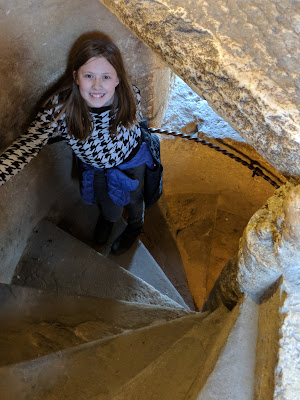 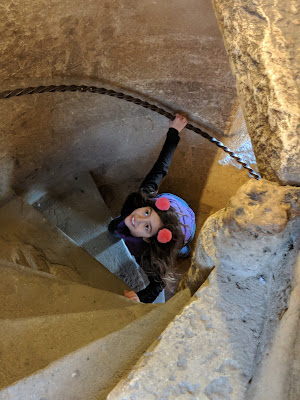 On our way up a tower to view the gardens from above. We could also see aldalusian horses training at the royal horse stables. 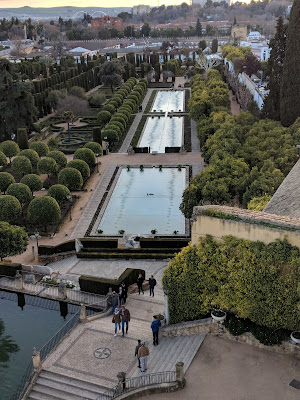 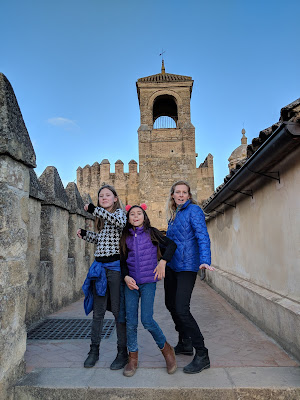 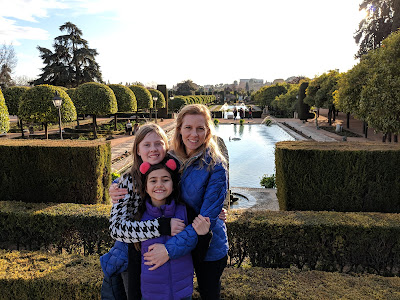 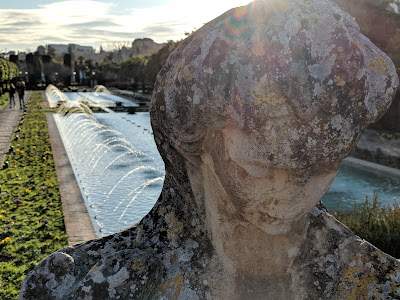 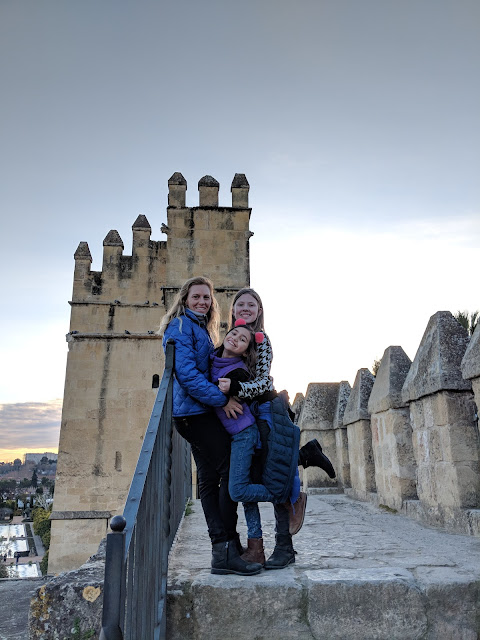 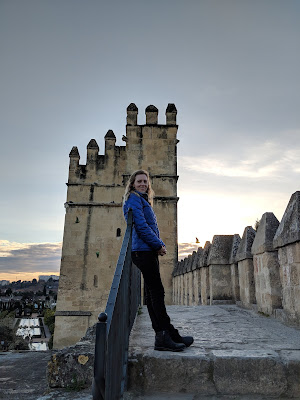 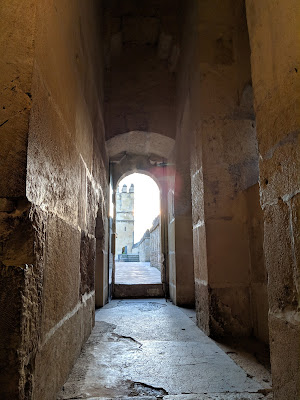 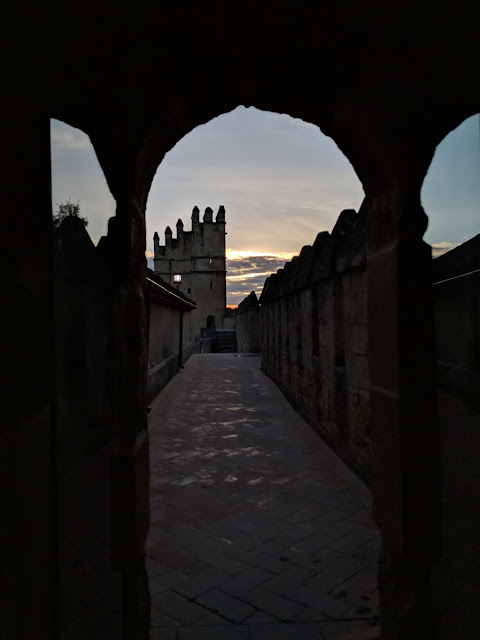 Cordoba treated us well. The Mezquita and Alcazar were as amazing as I remembered and a quick 45 minute AVE train brought us back to our home away from home in Seville.