Aviana's Overview of the past few days

- January 22, 2018
Hello. This is Aviana. I just wanted to write about my experience of the last couple of days. Specifically the Church/Cathedral thingy, the Churros, the Ice Cream, and my photography skills. (The most important things so far. Obvi.) 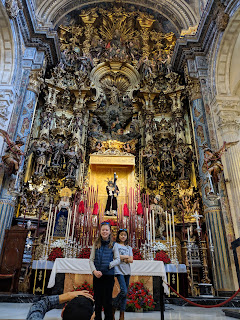 First things first, the Iglesia del Salvador. Initial impression, annoyed with ticket lady for being bossy. Second impression, impressed, and simultaneously uncomfortable. There were a lot of paintings of Jesus's bloody body, (More than I found necessary) and for some reason a human bone in a jar???? Structurally, I was blown away. Because of my immense interest in architecture, I was dumbfounded by the detail in each square foot of space. After adjusting to the somewhat eerie environment, we went into the museum part of the building. That was when Naomi (And frankly, me as well) lost it. The paintings were very detailed and gruesome, and once we got to a HUMAN BONE in a jar, she was just doing everything in her power to leave. Once we stepped outside, Naomi and I uttered sighs of relief, only to hear that, Oh goodie, we were going to a giant cathedral! 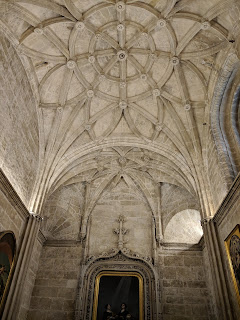 Once we got there, again, frustrating ticket lady told us to remove hats, before we could enter. I was surprised that the building was just cavernous. The outside, (at least from what I could tell) was just a small cubular (Is that a word???) building, but once inside, I realized just how massive this place was. The ceilings were at least 20 feet high even in the smallest rooms. (I was told the highest point on the Tower Giralda is 344 feet tall and the main ceiling is 138 feet tall). We didn't go in the tower, but I'm sure that it would have been cool. The ceilings were my favorite part of the entire building, which may sound weird, but look at that picture!!!  In my opinion that isn't even the best ceiling section, but it is a cool photo! There were many art pieces, and for some reason unknown to me, there were tombs in the tile floor with people buried under them and information about the person, right where one would walk?!?! Naomi and I were too scared to step on them even though it was completely allowed. I was happy when I didn't see any human parts, (although there were far more coffins just out in the open than I would have wanted) and that the people here seemed more interested in ENTIRE WALLS made of silver and gold. From an architecture standpoint I was very inspired, but Naomi and I were more than ready to go home as we were literally singing songs about how much we wanted to go back.

OK time to talk sugar. Yesterday for the first time in my life, I tried the famous Churros y Chocolate of Spain. My first thoughts were that it was very different from what I had expected. It was described to me as a donut and hot chocolate, and in my brain I pictured a Mexican churro with chocolate frosting in little swirls on it. Instead, it was like a non-sweetened light, fluffy, dough stick and thick, hot, chocolate paste to dip it in. IT WAS SOOOOO GOOD!!!!! The ice cream was surprisingly much better than average ice cream. We ended up buying a vat of it from a little place called Villar Helado, oreo flavor. 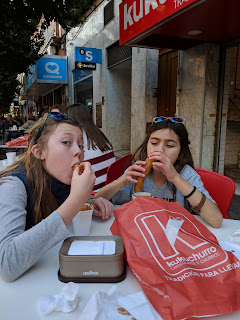 Yesterday we also did a professional photo challenge with me as the photographer and Naomi as the model. We took a lot of pictures (Some better than others) and made a few collages. It was so fun and I highly recommend it to all children on earth. (Especially if you have a pixel 2 because it takes great photos) It was also a very good way to document some of the cool things that can be found in this special place. 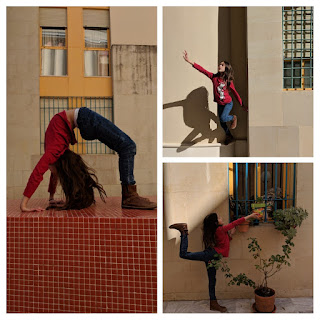 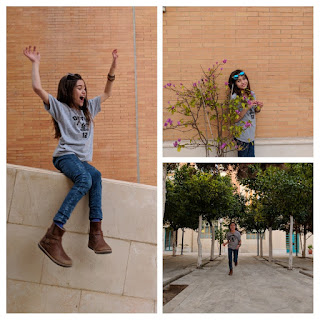 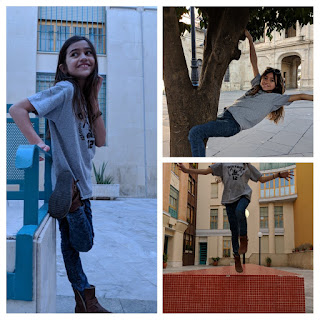 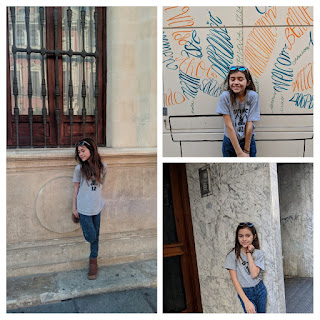